You are here: Home / Archives for World War III

After months of tension and threats by Russia toward Ukraine, the Russian military forces poised north, east, and south of Ukraine began a full-scale invasion by crossing the Ukrainian border on February 23, 2022. On the 24th massive battles reportedly were taking place all across Ukraine as Russian forces attacked Ukraine’s military positions. By the […]

On July 14, 2015, the Joint Comprehensive Plan of Action agreement was signed between Iran and the P5+1 nations and the European Union. The P5+1 nations include the five permanent members of the United Nations Security Council—United States, United Kingdom, France, Russia, and China—plus Germany. The agreement became effective on October 18, 2015, during the […]

The Trumpet Judgments In the book of Revelation, the Apostle John records terrible visions of nuclear weapons causing vast destruction at the end of the age through the generation of massive firestorms and conflagrations. In in some of the most frightening prophecies within the entire Bible, John describes the effects of horrific judgments coming upon […]

Probably the first characteristic that immediately comes to mind regarding the effects of nuclear war is the surging clouds of smoke and debris that quickly rise up to thousands of feet in the atmosphere after a nuclear blast. The majority of people would recognize a nuclear explosion solely as a result of seeing this distinctive […]

Although the formation of a mushroom cloud has become the most recognizable feature of a nuclear explosion (see previous section), it is actually not the generation of smoke that happens first, but the release and propagation of a wave of blinding light and intense heat energy. The production of energy from the process of fission […]

Fire, Smoke, and Brimstone The Battle of Armageddon is predicted to be the last and greatest conflict of mankind. Even the non-believing world has adopted this Biblical term to describe the ultimate world war. Today, most people including the media closely associates Armageddon with the modern view of World War III, including massive armies doing […]

While Daniel saw the beginnings of the final wars in the Middle East, other prophets went further and predicted what would happen next.  Ezekiel chapters 38 and 39 contain perhaps the most fascinating and frightening prophecy in the entire Bible concerning these future battles.  Where Daniel only hinted at the fact that a northern power […]

The most important passage concerning the wars of the end occurs in the book of Daniel.  In chapter 11 and continuing in chapter 12, Daniel discusses in detail the major prophetic events as they will occur during the reigns of the last three world powers:  Persia, Greece, and Rome.  The development of these prophecies within […]

NASA studies recently have indicated that the Fertile Crescent region in the Middle East is losing fresh water at a rapid rate.  The water flow in the important Euphrates and Tigris Rivers has decreased as a result of this trend and formerly arable land in the area has become cracked and dry.  The Tigris and […] 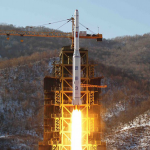 North Korea continues to develop its military capability as it test fired another long-range missile in late December, 2012.  The country now has demonstrated the potential of reaching the west coast of the U.S. with a ballistic missile, which can threaten major population centers containing millions of people.  In this case, the missile placed a […]

From Rosh to Russia The name of Magog is not the only tribe or people that Ezekiel mentions.  He also says that the future nation of Magog would be the principle leader of Rosh, Meshech, and Tubal.  Actually, in many Bibles this portion of verse 2 is typically translated as “…Magog, the chief prince of […]

The most important passage concerning the wars of the end occurs in the book of Daniel.  In chapter 11 and continuing in chapter 12, Daniel discusses in detail the major prophetic events as they will occur during the reigns of the last three world powers:  Persia, Greece, and Rome.  The development of these prophecies within […]

If the “abomination of desolation” had already taken place long before Christ was born, why did Jesus prophesy of it again in Matthew chapter 24?  Actually, what the Lord is saying is that history is going to repeat itself at the end of the age.  Remember, Paul predicts that the Antichrist would present himself as […]

In the Gospel of Matthew, Jesus prophesied of an event that he called the “abomination of desolation” (see also Israel Tomorrow).  Speaking in the gravest of terms, the Lord described in one brief passage precisely how the empire of the Beast will crumble.  This is what he said: “When ye, therefore, shall see the abomination […]

Iran is rising as a military power in the Middle East and is actively trying to develop nuclear weapons capability. The Bible predicts that this country will be aligned with Russia in an attack upon Israel before Christ returns. It is no surprise that Russia is now Iran’s principle backer and has vetoed attempts to […]

War is often glorified when absent and abhorred when present.  During times of peace, nations take pride in how their soldiers of the past have fought to maintain freedom and security for their country.  Memories quickly move from the blood and horror of the killing fields to the celebration of victory and patriotism.  This is […]

The Latter Rain is Coming The Holy Spirit is about to come into this world in a powerful new way that has never been seen before. It will be the Second Coming of the Holy Spirit, and He will transform the world in ways that we can not even imagine. The Bible talks about the […]

One Giant Step Closer to the Mark While the world was distracted and watching the events of Russia’s attack on Ukraine, President Biden quietly issued an executive order on March 9 that directs federal agencies to develop policies for the US government to regulate and issue a new digital currency, tentatively called the FedCoin (1). […]

After months of tension and threats by Russia toward Ukraine, the Russian military forces poised north, east, and south of Ukraine began a full-scale invasion by crossing the Ukrainian border on February 23, 2022. On the 24th massive battles reportedly were taking place all across Ukraine as Russian forces attacked Ukraine’s military positions. By the […]

In 2021, the digital vaccine passport was implemented to certify whether an individual has been fully vaccinated against the COVID-19 virus. It is now being used in dozens of countries, and without it, many people are unable to fully participate in society. Most of the vaccine passports incorporate a digitally signed QR Code, which is […]

The Quick Response Code (or QR Code) is a type of digital barcode that has quickly gained in popularity in recent years. It was invented by a Japanese auto company (Denso-Wave) in 1994 to provide scanning of inventory parts used in manufacturing. The QR Code provides a 2-dimensional matrix of digital information that has significant […]

For thousands of years, the Jews have observed this day, the 9th of Av, as an annual date of solemn remembrance. It is a day of fasting that represents past days of tragedy for the Jews. It typically occurs on the Jewish calendar during the month of July.  According to Jewish writings, Solomon’s Temple was […]

The Globalist Plot to Change the World System In the wake of the Wuhan virus and the disruptions caused to the health, political, and economic systems of the world, many powerful leaders are now taking advantage of the pandemic in an attempt to bring about a New World Order. The advocates of globalism are calling […]

In 2020, the world suddenly moved closer to a global surveillance system under the auspices of public “health and safety”.  The Chinese coronavirus fears stemming from a global pandemic has provided all the excuse that leaders needed to increase societal controls and implement high tech solutions to monitor entire populations. Even in countries with relative […]

One of the most significant events on the timeline to the Second Coming is predicted to be the sudden shock of the rise of the Empire of the Beast. As the previous section … END_OF_DOCUMENT_TOKEN_TO_BE_REPLACED

Bible prophecy predicts that there will be several significant events signaling the End of the Age. These seminal events will occur just prior to the beginning of a period … END_OF_DOCUMENT_TOKEN_TO_BE_REPLACED

The final aspect of the prophecies that relate to the effects of nuclear war is the widespread pollution of land and water by radioactive fallout, dust from the explosions and … END_OF_DOCUMENT_TOKEN_TO_BE_REPLACED

The incredible prophecies of Israel in the Last Days are the key to understanding just how close we are to the End of the Age.  The Bible predicts virtually everything that … END_OF_DOCUMENT_TOKEN_TO_BE_REPLACED

In the previous sections, we have seen that everything the Bible describes as being a characteristic of the Great Tribulation also correlates precisely to what is now expected … END_OF_DOCUMENT_TOKEN_TO_BE_REPLACED

Scorpions of Death As we have seen in previous sections, one of the main consequences of a nuclear explosion happening at or near ground level is that millions of tons of … END_OF_DOCUMENT_TOKEN_TO_BE_REPLACED

The Trumpet Judgments In the book of Revelation, the Apostle John records terrible visions of nuclear weapons causing vast destruction at the end of the age through the … END_OF_DOCUMENT_TOKEN_TO_BE_REPLACED

Although the formation of a mushroom cloud has become the most recognizable feature of a nuclear explosion (see previous section), it is actually not the generation of smoke … END_OF_DOCUMENT_TOKEN_TO_BE_REPLACED

The effects of nuclear weapons have been studied extensively since the initial use of atomic bombs upon Japan in 1945. As the pillars of smoke rose above the decimated cities … END_OF_DOCUMENT_TOKEN_TO_BE_REPLACED

Fire, Smoke, and Brimstone The Battle of Armageddon is predicted to be the last and greatest conflict of mankind. Even the non-believing world has adopted this Biblical term … END_OF_DOCUMENT_TOKEN_TO_BE_REPLACED

Bible quotations used throughout this website may come from one of several authoritative translations: