You are here: Home / World War III / Tigris and Euphrates Rivers are Drying Up 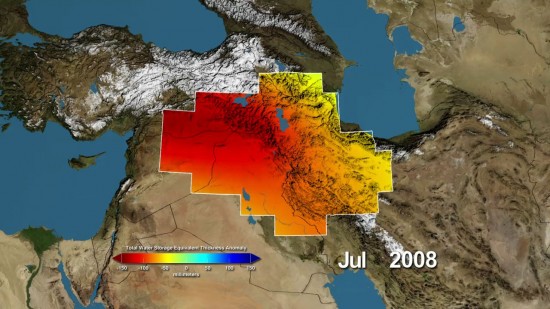 NASA studies recently have indicated that the Fertile Crescent region in the Middle East is losing fresh water at a rapid rate.  The water flow in the important Euphrates and Tigris Rivers has decreased as a result of this trend and formerly arable land in the area has become cracked and dry.  The Tigris and Euphrates Rivers are drying up, and these are the very rivers that were once a critical part of the Cradle of Civilization in ancient Mesopotamia 2000 years before Christ.  The decrease in water primarily has resulted from a major drought in 2007 and the loss of snow pack in the mountains to the north.  The image map from NASA’s Goddard Space Flight Center and the National Center for Atmospheric Research shows the vast decrease in fresh water in 2008, which continues today.  This loss has occurred over the last decade and amounts to over 144 cubic kilometers of water lost from these ancient river basins, which include vast areas in Turkey, Syria, Iraq, and Iran.

The Euphrates River is mentioned in the Bible in the Book of Revelation in a prophecy that is predicted to occur just before Jesus returns.  During the Great Tribulation when the global destruction of the last days is threatening the very existence of life on Earth, the Apostle John says:

“And the sixth angel poured out his vial upon the great river Euphrates; and the water thereof was dried up, that the way of the kings of the east might be prepared.”

During the coming battles of World War III, just before the attack of China and the other countries to the east upon Israel, the Euphrates River will be removed as being an obstacle by being dried up.  This will permit the march of a 200,000,000-man army to reach the Valley of Jehoshaphat (Armageddon) just as Christ returns to fight against them (Rev. 9:16).  Could the current trend toward drought in this region and the dramatic decrease in the Tigris and Euphrates Rivers in recent years be the first stage of the fulfillment of this prophecy?  It appears that this is only another important indication of how close we are to the Second Coming!

The final aspect of the prophecies that relate to the effects of nuclear war is the widespread pollution of land and water by radioactive fallout, dust from the explosions and … END_OF_DOCUMENT_TOKEN_TO_BE_REPLACED

In the previous sections, we have seen that everything the Bible describes as being a characteristic of the Great Tribulation also correlates precisely to what is now expected … END_OF_DOCUMENT_TOKEN_TO_BE_REPLACED

Scorpions of Death As we have seen in previous sections, one of the main consequences of a nuclear explosion happening at or near ground level is that millions of tons of … END_OF_DOCUMENT_TOKEN_TO_BE_REPLACED

The Trumpet Judgments In the book of Revelation, the Apostle John records terrible visions of nuclear weapons causing vast destruction at the end of the age through the … END_OF_DOCUMENT_TOKEN_TO_BE_REPLACED

Although the formation of a mushroom cloud has become the most recognizable feature of a nuclear explosion (see previous section), it is actually not the generation of smoke … END_OF_DOCUMENT_TOKEN_TO_BE_REPLACED

The effects of nuclear weapons have been studied extensively since the initial use of atomic bombs upon Japan in 1945. As the pillars of smoke rose above the decimated cities … END_OF_DOCUMENT_TOKEN_TO_BE_REPLACED

Fire, Smoke, and Brimstone The Battle of Armageddon is predicted to be the last and greatest conflict of mankind. Even the non-believing world has adopted this Biblical term … END_OF_DOCUMENT_TOKEN_TO_BE_REPLACED

As in water face answereth to face, so the heart of man to man.
Proverbs 27:19
DailyVerses.net