You are here: Home / World War III / Firestorms and Conflagrations 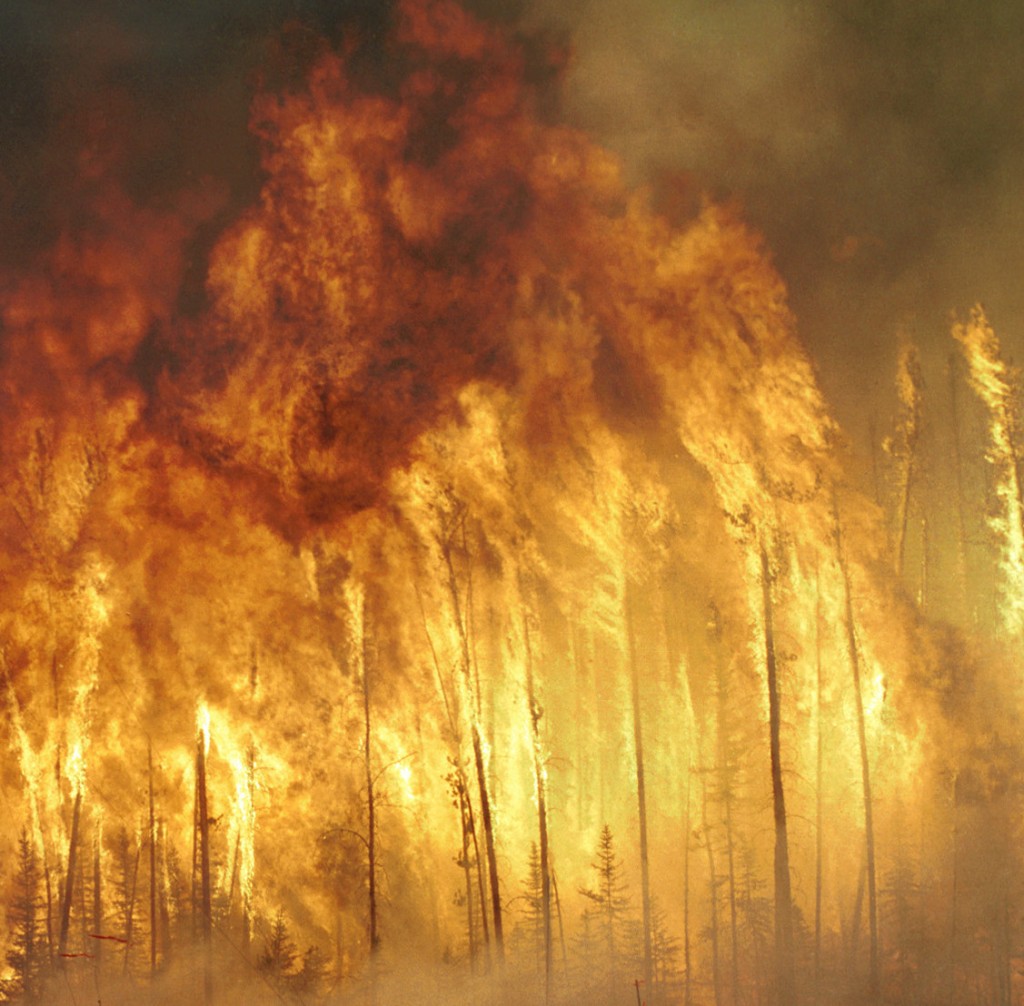 In the book of Revelation, the Apostle John records terrible visions of nuclear weapons causing vast destruction at the end of the age through the generation of massive firestorms and conflagrations. In in some of the most frightening prophecies within the entire Bible, John describes the effects of horrific judgments coming upon the Earth as seven trumpets begin to sound. Each of these trumpets heralds a cataclysmic event that will be seen to shake the very foundation of life on this planet. In fact, so monumental is the beginning of this period that the Bible says that there will be complete silence in Heaven before it starts (Rev. 8:1). In chapter 8 of Revelation, the seventh and final seal is opened by the Lord to set these events in motion. This is the way John describes this solemn scene:

“And when he had opened the seventh seal, there was silence in heaven about the space of half an hour.

And I saw the seven angels which stood before God; and to them were given seven trumpets.

And another angel came and stood at the altar, having a golden censer; and there was given unto him much incense, that he should offer it with the prayers of all saints upon the golden altar which was before the throne.

And the smoke of the incense, which came with the prayers of the saints, ascended up before God out of the angel’s hand.

And the angel took the censer, and filled it with fire of the altar, and cast it into the earth: and there were voices, and thunderings, and lightnings, and an earthquake.

And the seven angels which had the seven trumpets prepared themselves to sound.”

As John sees the angels begin to blow these trumpets in timed succession, one by one they usher in dire conditions that will mark the final three and a half years before the Return of Christ. The first three of these events is described with one major characteristic in common: widespread destruction of the Earth by fire. As we will see, one of the major effects of nuclear war is the creation of firestorms and conflagrations, which will consume the cities and works of man as well as huge portions of the world’s ecosystem.

But first, how do we know that the trumpets occur in the last half of Daniel’s 70th Week (the final seven years of this age) and not the first half? Simply because the horrible nature of what the trumpets portend can only refer to a holocaust of the most catastrophic proportions. When these events begin to occur, life as we know it will be forever changed. What John foresees in these prophecies is nothing less than the start of the Great Tribulation, a time period which Jesus predicted would be terrible beyond anything that man has ever experienced. After the first trumpets sound and the events they herald take place, this current world system and particularly the Antichrist’s kingdom will be consumed and destroyed unto the end (Dan. 7:26).

In fact, the first three trumpets all allude to the initial fireballs and thermal pulses of multiple nuclear explosions, and they appear in these prophecies to occur in close succession to one another. In verse 7 John says…

“The first angel sounded, and there followed hail and fire mixed with blood, and they were cast upon the earth…”

“And the second angel sounded, and, as it were, a great mountain burning with fire was cast into the sea…”

“…the third angel sounded, and there fell a great star from heaven, burning as though it were a lamp, and it fell upon the third part of the rivers, and upon the fountains of waters.”

In the language of a first-century prophet having visions of a power being unleashed that he could not fully understand, John said he saw a huge fireball, a mountain of fire, and a star blazing with fire all fall upon the earth, sea, and fresh waters in the last days. If the Lord actually allowed John to have a realistic vision of atomic bombs exploding, he could not possibly have described what he was seeing in scientific terms. Anyone who witnessed nuclear explosions for the first time without knowing what he was seeing would be at a loss for words to explain the power being released. Words like “star” or “mountain of fire” would certainly be appropriate to describe the experience.

God reveals in these trumpet judgments that the coming destruction by fire will encompass both land and water. This too is completely expected of what would happen during a World War III battle scenario, especially when we consider a nuclear exchange occurring between the major global powers. In the present strategy of nuclear warfare, military targets would be the first priority. Primary targets would include ICBM launch sites, airfields which are capable of handling the large bomber fleets, and military bases. Land targets also would include mobile launch vehicles, major command and control centers, and communication systems. However, even these initial targets would not be restricted to land or to remote battlefields. No doubt, some thermonuclear missiles would also be directed toward the opposing navies—particularly the nuclear-equipped battle ships, carriers, and submarines…[read entire article]

The final aspect of the prophecies that relate to the effects of nuclear war is the widespread pollution of land and water by radioactive fallout, dust from the explosions and … END_OF_DOCUMENT_TOKEN_TO_BE_REPLACED

In the previous sections, we have seen that everything the Bible describes as being a characteristic of the Great Tribulation also correlates precisely to what is now expected … END_OF_DOCUMENT_TOKEN_TO_BE_REPLACED

Scorpions of Death As we have seen in previous sections, one of the main consequences of a nuclear explosion happening at or near ground level is that millions of tons of … END_OF_DOCUMENT_TOKEN_TO_BE_REPLACED

The Trumpet Judgments In the book of Revelation, the Apostle John records terrible visions of nuclear weapons causing vast destruction at the end of the age through the … END_OF_DOCUMENT_TOKEN_TO_BE_REPLACED

Although the formation of a mushroom cloud has become the most recognizable feature of a nuclear explosion (see previous section), it is actually not the generation of smoke … END_OF_DOCUMENT_TOKEN_TO_BE_REPLACED

The effects of nuclear weapons have been studied extensively since the initial use of atomic bombs upon Japan in 1945. As the pillars of smoke rose above the decimated cities … END_OF_DOCUMENT_TOKEN_TO_BE_REPLACED

Fire, Smoke, and Brimstone The Battle of Armageddon is predicted to be the last and greatest conflict of mankind. Even the non-believing world has adopted this Biblical term … END_OF_DOCUMENT_TOKEN_TO_BE_REPLACED

For it is written, As I live, saith the Lord, every knee shall bow to me, and every tongue shall confess to God.
Romans 14:11
DailyVerses.net