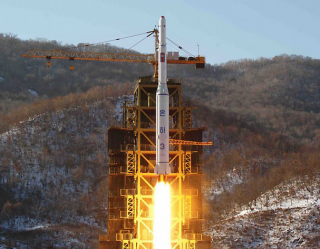 North Korea continues to develop its military capability as it test fired another long-range missile in late December, 2012.  The country now has demonstrated the potential of reaching the west coast of the U.S. with a ballistic missile, which can threaten major population centers containing millions of people.  In this case, the missile placed a satellite into orbit, but a similar weaponized rocket can easily carry a nuclear warhead to targets many thousands of miles away.  North Korea also made its third nuclear test in the northern mountains at the Punggye-ri nuclear test facility on February 11, which resulted in an explosion estimated to be at least several kilotons in power.  Although their nuclear weapons are currently believed to be too large and heavy to be contained within their ballistic missiles, Pyongyang said that this latest test involved a “miniaturized” weapon.

The Bible predicts that at the end of the age the nations of the world will prepare for the final Battle of Armageddon by building up military arms even while sacrificing the ability to feed their own people.  Joel prophesied, “Proclaim this among the nations: Prepare for war!  Rouse the warriors!  Let all the fighting men draw near and attack.  Beat your plowshares into swords and your pruning hooks into spears.  Let the weakling say, ‘I am strong!'” (Joel 3: 9-10; NIV).

The prophet Joel predicted that in the years immediately before Jesus returns, the nations would be busy arming themselves to the teeth.  Even small and economically weak nations would build their militaries instead of taking care of their people.  North Korea is one of the poorest countries in the world and it is constantly on the edge of mass hunger and even starvation.  Without external food aid, it is clear that the people of North Korea would be in very real danger, because the government constantly diverts critical money and resources to its relentless military buildup.  Joel’s prediction is the opposite of the prediction of peace for the Kingdom Age after Christ returns, which ironically is quoted on the outside of the United Nations building.  Isaiah prophesied of Christ: “And he shall judge among the nations, and shall rebuke many people: and they shall beat their swords into plowshares, and their spears into pruning hooks: nation shall not lift up sword against nation, neither shall they learn war any more” (Isaiah 2:4; KJV).

Today the world prepares for the final war; when Christ returns they shall prepare for a thousand years of peace in the Kingdom Age.  These predictions are two absolute opposites: one leading to death and destruction in the world today and the other leading to peace and eternal life in the world to come.

The final aspect of the prophecies that relate to the effects of nuclear war is the widespread pollution of land and water by radioactive fallout, dust from the explosions and … END_OF_DOCUMENT_TOKEN_TO_BE_REPLACED

In the previous sections, we have seen that everything the Bible describes as being a characteristic of the Great Tribulation also correlates precisely to what is now expected … END_OF_DOCUMENT_TOKEN_TO_BE_REPLACED

Scorpions of Death As we have seen in previous sections, one of the main consequences of a nuclear explosion happening at or near ground level is that millions of tons of … END_OF_DOCUMENT_TOKEN_TO_BE_REPLACED

The Trumpet Judgments In the book of Revelation, the Apostle John records terrible visions of nuclear weapons causing vast destruction at the end of the age through the … END_OF_DOCUMENT_TOKEN_TO_BE_REPLACED

Although the formation of a mushroom cloud has become the most recognizable feature of a nuclear explosion (see previous section), it is actually not the generation of smoke … END_OF_DOCUMENT_TOKEN_TO_BE_REPLACED

The effects of nuclear weapons have been studied extensively since the initial use of atomic bombs upon Japan in 1945. As the pillars of smoke rose above the decimated cities … END_OF_DOCUMENT_TOKEN_TO_BE_REPLACED

Fire, Smoke, and Brimstone The Battle of Armageddon is predicted to be the last and greatest conflict of mankind. Even the non-believing world has adopted this Biblical term … END_OF_DOCUMENT_TOKEN_TO_BE_REPLACED