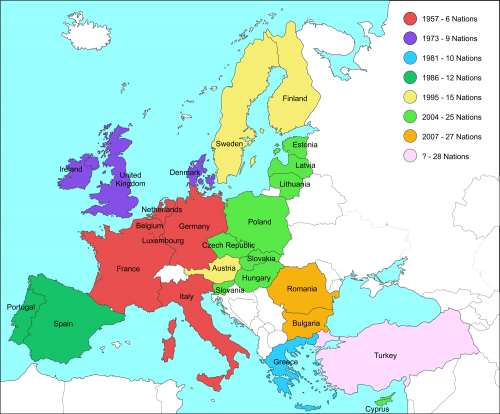 The most unexpected and significant expansion of the EC occurred in 1990 as a result of the crumbling of the Berlin Wall and the dissolution of communism across Eastern Europe.  The resultant reuniting of East and West Germany into a new super-state promised to dramatically affect the course of world events.  This expansion did two things.  It created the most powerful nation within the EC and elevated the union to a point where at least potentially they could become the greatest political, economic, and military force the world has ever seen.  With the addition of East Germany, the EC then had over 343 million people, compared with 240 million in the U.S at that time.    The new growth in the European alliance could now become the seed to the creation of a new world order on a global scale.

Terrance Petty of the Associated Press said that “even with the shocks and economic burdens of unification, the new Germany of 80 million people is an economic powerhouse astride central Europe.”  He adds, “Now they have confidently taken the lead in European affairs, giving them the most dominant position they have had on the continent since Adolf Hitler’s defeat in 1945” (Associated Press, 10/6/91).

Of course the new reunified Germany raised old fears among its neighbors, especially the British and the French.  For the third time in the Twentieth Century, a united Germany has risen to clear European dominance.  Even before the reunification, West Germany’s gross domestic product (GDP) represented about one-fourth of the EC’s total GDP.  If Germany now decided to become a military superpower as well as an economic one, they could easily monopolize the entire European continent.  The smaller nations of Europe had every right to be concerned.

Germany’s stated goal, however, was not to recreate the darkest hours of their history, but to further support European cooperation and integration.  With a united Germany at the helm, the EC could soon have more influence than the U.S. on the world political and economic scene.  All that was lacking was unity and leadership for the overall community, but even that would change…[more]

The final aspect of the prophecies that relate to the effects of nuclear war is the widespread pollution of land and water by radioactive fallout, dust from the explosions and … END_OF_DOCUMENT_TOKEN_TO_BE_REPLACED

In the previous sections, we have seen that everything the Bible describes as being a characteristic of the Great Tribulation also correlates precisely to what is now expected … END_OF_DOCUMENT_TOKEN_TO_BE_REPLACED

Scorpions of Death As we have seen in previous sections, one of the main consequences of a nuclear explosion happening at or near ground level is that millions of tons of … END_OF_DOCUMENT_TOKEN_TO_BE_REPLACED

The Trumpet Judgments In the book of Revelation, the Apostle John records terrible visions of nuclear weapons causing vast destruction at the end of the age through the … END_OF_DOCUMENT_TOKEN_TO_BE_REPLACED

Although the formation of a mushroom cloud has become the most recognizable feature of a nuclear explosion (see previous section), it is actually not the generation of smoke … END_OF_DOCUMENT_TOKEN_TO_BE_REPLACED

The effects of nuclear weapons have been studied extensively since the initial use of atomic bombs upon Japan in 1945. As the pillars of smoke rose above the decimated cities … END_OF_DOCUMENT_TOKEN_TO_BE_REPLACED

Fire, Smoke, and Brimstone The Battle of Armageddon is predicted to be the last and greatest conflict of mankind. Even the non-believing world has adopted this Biblical term … END_OF_DOCUMENT_TOKEN_TO_BE_REPLACED