You are here: Home / Israel / The Regathering of Israel 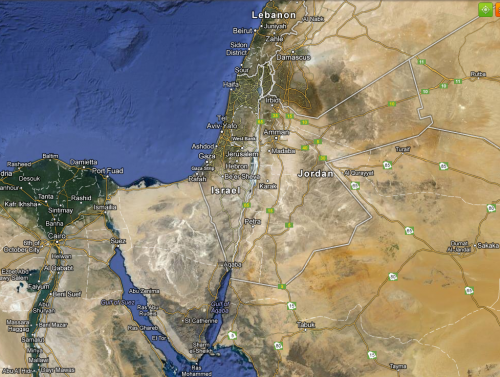 With all the prophecies relating to the doom and gloom of a disobedient Israel it’s easy to come away with the feeling that all hope was lost for God’s chosen people (see the previous prophecies concerning Israel).  For centuries on end Jerusalem was controlled by Gentile powers just as Jesus had predicted.  Even those who typically scoff at the Bible have to think twice about the prophecies of Israel’s scattering, because recorded history proves that they were fulfilled exactly as stated.  Only the power of an eternal God could control a dispersed people for so long and still maintain their national and religious identity.

Yet even as Israel was in the clutches of the Lord’s wrath and experiencing persecution all over the world, year after year the Jews kept their hopes alive for an eventual return to Palestine as they gathered together on their holy days with the cry, “Next year in Jerusalem!”  Somehow they seemed to know deep down that their plight would not last forever.  They believed that someday they would regain the land that was promised to them and become a unified nation again.  This hope was not just wishful thinking on the part of a persecuted people.  They were certain that the regathering of Israel would eventually happen, because their holy scriptures predicted it.  In fact, the very same prophets that predicted the scattering of Israel into all lands also went on to prophesy of a time when they would be regathered.  In the book of Jeremiah these words can be found:

“For, lo, the days come, saith the Lord, that I will bring again the captivity of my people, Israel and Judah, saith the Lord; and I will cause them to return to the land that I gave to their fathers, and they shall possess it.”

The words “bring again the captivity of” in the King James translation actually mean “cause the captivity to cease”.  Some of the modern versions of the Bible translate “restore the fortunes of”, but in any case the meaning is quite clear.  Sometime in the prophet Jeremiah’s future the Lord would allow the Jews to return to Israel and possess the same land which was originally given to Abraham.

It might be claimed that the primary purpose of this prophecy was to simply encourage Jeremiah’s listeners, since he prophesied of these things in the midst of the dark days of the Babylonian captivity.  His words gave hope to those who still believed in the Lord by helping to confirm the fact that God would not forsake his people forever.  However, the ultimate fulfillment of this prediction bespeaks a time in Jeremiah’s distant future.  As we shall soon see, most of the prophecies dealing with the regathering of Israel have their focus firmly fixed on the end of the age and particularly at the time just before the return of Christ…[more]

The final aspect of the prophecies that relate to the effects of nuclear war is the widespread pollution of land and water by radioactive fallout, dust from the explosions and … END_OF_DOCUMENT_TOKEN_TO_BE_REPLACED

In the previous sections, we have seen that everything the Bible describes as being a characteristic of the Great Tribulation also correlates precisely to what is now expected … END_OF_DOCUMENT_TOKEN_TO_BE_REPLACED

Scorpions of Death As we have seen in previous sections, one of the main consequences of a nuclear explosion happening at or near ground level is that millions of tons of … END_OF_DOCUMENT_TOKEN_TO_BE_REPLACED

The Trumpet Judgments In the book of Revelation, the Apostle John records terrible visions of nuclear weapons causing vast destruction at the end of the age through the … END_OF_DOCUMENT_TOKEN_TO_BE_REPLACED

Although the formation of a mushroom cloud has become the most recognizable feature of a nuclear explosion (see previous section), it is actually not the generation of smoke … END_OF_DOCUMENT_TOKEN_TO_BE_REPLACED

The effects of nuclear weapons have been studied extensively since the initial use of atomic bombs upon Japan in 1945. As the pillars of smoke rose above the decimated cities … END_OF_DOCUMENT_TOKEN_TO_BE_REPLACED

Fire, Smoke, and Brimstone The Battle of Armageddon is predicted to be the last and greatest conflict of mankind. Even the non-believing world has adopted this Biblical term … END_OF_DOCUMENT_TOKEN_TO_BE_REPLACED