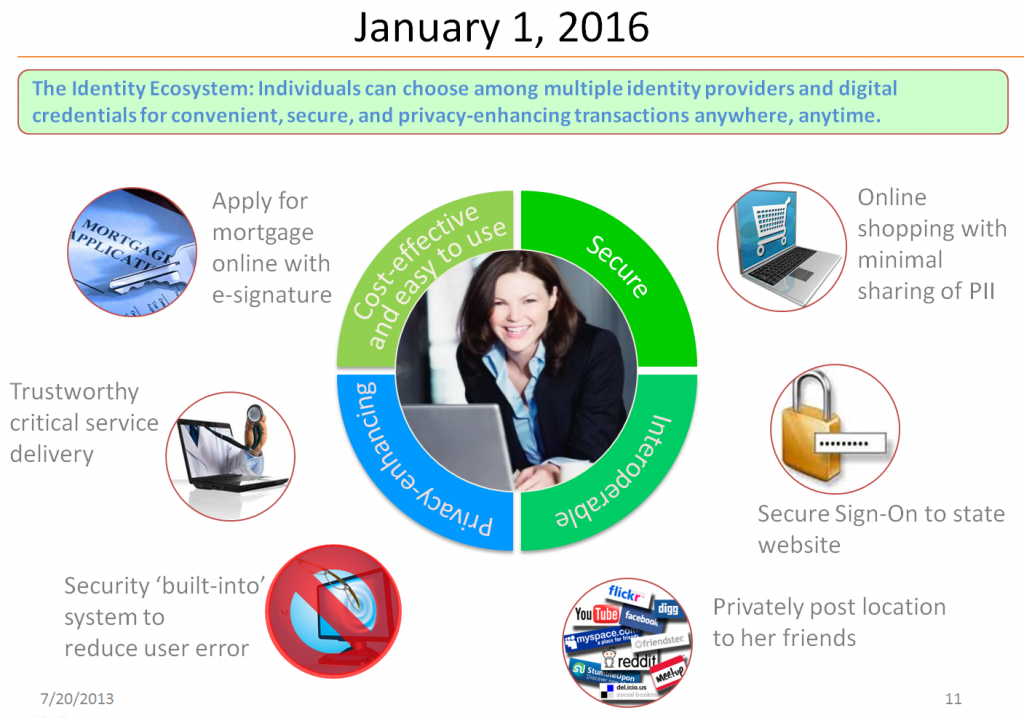 Recently, the White House started an initiative called the National Strategy for Trusted Identities in Cyberspace (NSTIC) that could soon lead to a requirement for everyone to have smart card IDs for Internet access.  In a white paper brief published in June of 2013, the Smart Card Alliance says, “approximately 12 million Americans have been affected by identity theft of some kind in the past 2 years”.  Because of this threat from online identity thieves and hackers, the Alliance advocates that individuals should have to prove “that they are who they say they are” to use the Internet.  The Smart Card Alliance and the Obama Administration now want to create what they call an “environment of trusted identities” within the Internet infrastructure.  This scheme would become the basis for a new “identity ecosystem” that would allow governments, financial institutions, and corporations to know who you are the moment you sign onto the World Wide Web.  The NSTIC would provide each person with an official identity to log onto the Internet with a smart card every time your browser is launched.  According to the NSTIC white paper and some accompanying presentations on the NIST web site, the system would create by January 1, 2016, a “secure, interoperable, privacy-enhancing credential” to authenticate users online.

The NSTIC system being proposed would be administered by an official Identity Provider (IDP) that has authority to issue identities using a secure system, which they claim can’t be hacked, nor can identities be stolen by identity thieves.  No one will be able to assume your identity or capture your credit card information while making purchases online.  It also would make online activities less likely to result in infected computers, because the people who write viruses would become known the minute they tried to log onto the Internet and upload their malicious program.  The proposed secure environment would encompass a person’s identity, including their real name, user names for signing onto sites, e-mail addresses, phone numbers, nick names, personas, and physical characteristics such as sex, age, home address, and even your profession.  However, it doesn’t stop there; the interconnected matrix of personal data as shown in the figure comes right from the NIST.gov web page.  The plan is to capture anything and everything about a user to guarantee a secure environment of trusted identities on the Internet.

On the surface, this plan sounds great doesn’t it?  Purportedly no more concern for stolen credit card numbers or stolen identities combined with a great reduction or elimination of the hackers, scammers, and malicious malware that constantly bombards our web experience.  However, there is a dark side to this plan.  It could be especially bad if you are a user.  This is because all of your online activities would become completely transparent to those controlling the system.  For this reason, it is particularly enticing for those that have power over everyone’s identity.  The corporate world and governments will love the system, because it would allow complete surveillance of anything done online.  As soon as you log onto the Internet, your smart card identity will provide tracking capability for everything you do.  Of course, huge databases will be created that will store your entire history of online activities, allowing review by intelligence agencies and police.  Web searching, e-mail, social media posts, tweets, and comments on blogs will be traced by government and network authorities.  No privacy or anonymity schemes or encryption programs will protect your activities; the system will know everything about you by the tracks you leave online.

Even more troubling, according to the Smart Card Alliance, the IDP authority also can revoke, suspend, or restore a person’s ID.  Therefore, if you do something the IDP or the government doesn’t approve of, such as search for the wrong word or phrase, or say something politically incorrect on social media, they can revoke your privilege of using the Internet.  This would effectively ban you from digital communications, including the use of smart phones, and prevent you from accessing or using any financial services, including simple bill payment sites.  Governments might even file charges if someone dares to say something not approved by the NSTIC guidelines, such as supporting the wrong political party, having politically incorrect moral convictions, saying something against official policies, or criticizing protected groups.  Even without this system some people have already been wrongly charged with “hate speech” for writing something against certain sinful behaviors or immoral activities, such as abortion or homosexuality.  Others have been persecuted by standing up for Christian principles or daring to believe that Christ is the only way to God and salvation.

Can you imagine what will happen if this Internet authority can use online information to segregate individuals based solely on their online activities?  Database software algorithms can easily identify the politically, religiously, or socially undesirables and mark them for corrective action or ban them from the Internet altogether.  Governments, political parties, and liberal activists will be able to target people that don’t conform to their world view and prevent them from having Internet access or worse throw them in prison.

The NSTIC proposal is just another step toward the total surveillance society that is coming.  When the Antichrist rises to power, he will have greater capabilities to track and monitor people than any other dictator in history.  His will be a dictatorship and an empire that no one will be able to hide from or escape.  At that point, anyone that doesn’t swear allegiance to the Empire-Beast and obtain its Mark will be cut off from all ability to function in society.  For more information about the predictions in the Bible concerning this empire, see the sections on the New World Order, The Antichrist, and the Mark of the Beast.

The final aspect of the prophecies that relate to the effects of nuclear war is the widespread pollution of land and water by radioactive fallout, dust from the explosions and … END_OF_DOCUMENT_TOKEN_TO_BE_REPLACED

In the previous sections, we have seen that everything the Bible describes as being a characteristic of the Great Tribulation also correlates precisely to what is now expected … END_OF_DOCUMENT_TOKEN_TO_BE_REPLACED

Scorpions of Death As we have seen in previous sections, one of the main consequences of a nuclear explosion happening at or near ground level is that millions of tons of … END_OF_DOCUMENT_TOKEN_TO_BE_REPLACED

The Trumpet Judgments In the book of Revelation, the Apostle John records terrible visions of nuclear weapons causing vast destruction at the end of the age through the … END_OF_DOCUMENT_TOKEN_TO_BE_REPLACED

Although the formation of a mushroom cloud has become the most recognizable feature of a nuclear explosion (see previous section), it is actually not the generation of smoke … END_OF_DOCUMENT_TOKEN_TO_BE_REPLACED

The effects of nuclear weapons have been studied extensively since the initial use of atomic bombs upon Japan in 1945. As the pillars of smoke rose above the decimated cities … END_OF_DOCUMENT_TOKEN_TO_BE_REPLACED

Fire, Smoke, and Brimstone The Battle of Armageddon is predicted to be the last and greatest conflict of mankind. Even the non-believing world has adopted this Biblical term … END_OF_DOCUMENT_TOKEN_TO_BE_REPLACED

Before the mountains were brought forth, or ever thou hadst formed the earth and the world, even from everlasting to everlasting, thou art God.
Psalm 90:2
DailyVerses.net