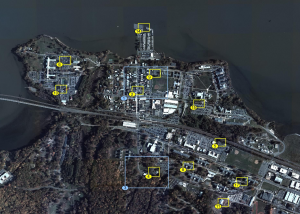 Unmanned aerial vehicles (UAVs) have been deployed since the mid-1990s for use in visual reconnaissance in battle fields, proving beneficial especially in Iraq and Afghanistan.  At first these drones were only armed with cameras or video capability to find enemy targets, but they subsequently were equipped with Hellfire missiles and other air-to-ground guided missiles to take out enemy insurgents or terrorists in regions that ground troops couldn’t quickly or safely access.  They have been instrumental in eliminating many al-Qaida leaders and other armed terrorist fighters traveling in vehicles, associating in open groups, or meeting within buildings.

Now a new super-high resolution digital camera technology has been developed that will extend the surveillance ability of these UAV drones to incredible levels.  A 1.8 gigapixel video camera has been created by assembling 368 imaging sensors that are normally found in 5 megapixel smartphone cameras into a single digital sensor.  A DARPA project called the Autonomous Real-time Ground Ubiquitous Surveillance – Imaging System (ARGUS-IS) has lead to a UAV drone that can fly at an altitude of 15-20,000 feet while spying on an area of over 100 square miles at high resolution.  Its capabilities include acquiring video at 15 fps or producing a variety of wide angle or telephoto still images at resolutions high enough to distinguish 6 inch objects from high altitude.  A drone equipped with this camera can track at any given moment up to 65 different video windows on the ground beneath.  Remote software control allows it to follow multiple moving targets simultaneously, including vehicles and people moving within its frame of reference. 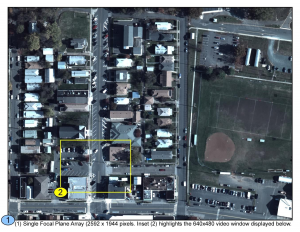 From the DARPA web site:

“The Autonomous Real-time Ground Ubiquitous Surveillance-Imaging System (ARGUS-IS) program is developing a real-time, high-resolution, wide-area video surveillance system that provides the warfighter a minimum of 65 VGA video windows across the field of view.  Each video window is electronically steerable independent of the others, and can either provide continuous imagery of a fixed area on the ground or be designated to automatically keep a specified target (dismount or vehicle) in the window.”

Now that the U.S. government has begun to use UAV surveillance upon its own people, drones equipped with the gigapixel ARGUS-IS could be used to create the ultimate monitoring and control platform for the coming totalitarian system.  Anyone deemed to be a terrorist, anti-government activist, an untrusted patriot, or any other member of a suspect group could be targeted for surveillance using an army of these drones flying overhead. 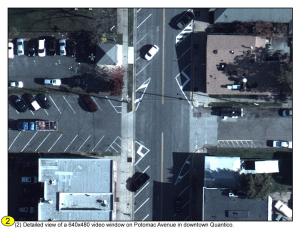 The coming global government that is predicted by the Bible will have an incredible array of technologies to monitor and control people.  The surveillance society that is being formed today using modern digital inventions will provide the Antichrist with a tight grip over all people.  This will encompass absolute control over individual identity, money, buying and selling, and travel within the empire.  Anyone daring to oppose this system will be branded a terrorist or a subversive and won’t be authorized to participate in any aspect of society.  When true Christians turn away from this evil empire, the consequences will be absolute.  The followers of Christ will become traders to the empire and tracked down and persecuted for not getting the Mark or following the Antichrist’s system.  See the sections on the New World Order and the Mark of the Beast for more information.

The final aspect of the prophecies that relate to the effects of nuclear war is the widespread pollution of land and water by radioactive fallout, dust from the explosions and … END_OF_DOCUMENT_TOKEN_TO_BE_REPLACED

In the previous sections, we have seen that everything the Bible describes as being a characteristic of the Great Tribulation also correlates precisely to what is now expected … END_OF_DOCUMENT_TOKEN_TO_BE_REPLACED

Scorpions of Death As we have seen in previous sections, one of the main consequences of a nuclear explosion happening at or near ground level is that millions of tons of … END_OF_DOCUMENT_TOKEN_TO_BE_REPLACED

The Trumpet Judgments In the book of Revelation, the Apostle John records terrible visions of nuclear weapons causing vast destruction at the end of the age through the … END_OF_DOCUMENT_TOKEN_TO_BE_REPLACED

Although the formation of a mushroom cloud has become the most recognizable feature of a nuclear explosion (see previous section), it is actually not the generation of smoke … END_OF_DOCUMENT_TOKEN_TO_BE_REPLACED

The effects of nuclear weapons have been studied extensively since the initial use of atomic bombs upon Japan in 1945. As the pillars of smoke rose above the decimated cities … END_OF_DOCUMENT_TOKEN_TO_BE_REPLACED

Fire, Smoke, and Brimstone The Battle of Armageddon is predicted to be the last and greatest conflict of mankind. Even the non-believing world has adopted this Biblical term … END_OF_DOCUMENT_TOKEN_TO_BE_REPLACED

The grace of our Lord Jesus Christ be with you all. Amen.
Revelation 22:21
DailyVerses.net