You are here: Home / Mark of the Beast / Universal Smart Cards are Next 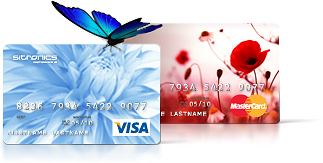 Surprisingly, Russia is one of the most advanced countries for implementing smart card technologies (Image: Sitronics).  They actually have issued more cards than their total population, which means that the cards are already well ingrained within their society.  Now they are planning to implement a “universal electronic card” (UEC) to be released in 2013, which will be a single card for all applications that smart cards can be used for today.  This means that instead of issuing separate cards for banking, social services, medical records, transportation, government identification, drivers license, for passing security points or entering secure doors, or signing on to computer networks, a single smart UEC could do all of these functions.  This is the next major step to creating a single worldwide ID card that all people will be issued to participate in society.  Russia and other countries are far ahead of the U.S. in this regard, but the new card will be coming here as well.  If a single card can now replace cash and a host of other functions, can the Mark of the Beast be far behind?

Also see: Sitronics and a video news cast on the implementation of the UEC in Russia.

The final aspect of the prophecies that relate to the effects of nuclear war is the widespread pollution of land and water by radioactive fallout, dust from the explosions and … END_OF_DOCUMENT_TOKEN_TO_BE_REPLACED

In the previous sections, we have seen that everything the Bible describes as being a characteristic of the Great Tribulation also correlates precisely to what is now expected … END_OF_DOCUMENT_TOKEN_TO_BE_REPLACED

Scorpions of Death As we have seen in previous sections, one of the main consequences of a nuclear explosion happening at or near ground level is that millions of tons of … END_OF_DOCUMENT_TOKEN_TO_BE_REPLACED

The Trumpet Judgments In the book of Revelation, the Apostle John records terrible visions of nuclear weapons causing vast destruction at the end of the age through the … END_OF_DOCUMENT_TOKEN_TO_BE_REPLACED

Although the formation of a mushroom cloud has become the most recognizable feature of a nuclear explosion (see previous section), it is actually not the generation of smoke … END_OF_DOCUMENT_TOKEN_TO_BE_REPLACED

The effects of nuclear weapons have been studied extensively since the initial use of atomic bombs upon Japan in 1945. As the pillars of smoke rose above the decimated cities … END_OF_DOCUMENT_TOKEN_TO_BE_REPLACED

Fire, Smoke, and Brimstone The Battle of Armageddon is predicted to be the last and greatest conflict of mankind. Even the non-believing world has adopted this Biblical term … END_OF_DOCUMENT_TOKEN_TO_BE_REPLACED