You are here: Home / End Times Chronology / The Sign Posts of History 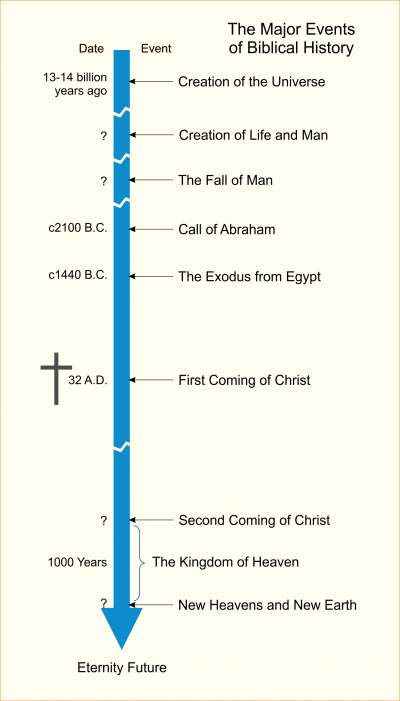 Before the end time sequence of events leading up to the Second Coming is determined, it is beneficial to first understand the major turning points or sign posts of history from a Biblical perspective.  The primary sign posts of history that have been preordained by the Lord each have served to bring all of creation, and particularly mankind, closer to the ultimate goal of eliminating this current evil system and replacing it with the goodness of the Kingdom of God.  The final result also will eliminate the influence of Satan and the evil angels that rebelled with him sometime in the distant past.  Thus, as time moves forward along the arrow of history, we come closer to the time when perfection and everlasting life will replace corruption and death, and righteousness and goodness will replace sin and evil.

When looking at the chronological sequence of these events from the beginning to the end, an overall Biblical perspective of history quickly becomes apparent.  In fact, from the very earliest events at the dawn of creation all the way up to the making of the new heavens and the new earth, the entire Word of God can be seen to have a purpose that is directed at the result of redeeming creation from the effects of sin and evil through Christ.

The first figure shows a timeline of this chronology in a greatly simplified view.  Although the relative positioning of each event is accurate on the timeline, the dates that each event occurred (or will occur) and time periods between all of the events are not known.  For instance, the date for the creation of the universe cannot be determined precisely, but modern science has revealed that it likely took place a very, very long time ago—some 13-14 billion years into the past.  In addition, it is equally impossible to determine exactly when Adam and Eve were created, although we know that it was much closer to our time than the creation date.

For those that may have trouble with the concept of an ancient universe and a very old Earth, remember that the six “days” of creation translated in Genesis is actually six “eons” in the original language, which implies much longer time periods.  An infinite God that has no beginning and no end is not limited by our simplistic view of time and space.  Over the last two centuries knowledge of the universe has increased dramatically, revealing the truth of God’s creation which was hidden to previous generations; however, this is just as the prophet Daniel predicted that knowledge would be increased in the last days (Dan. 12:4).  We now have a much better understanding of the awesomeness of the universe and of the God that created it.  The Lord has revealed to our generation more than any other generation before, the fundamental properties of the universe.  The unbelievable vastness and wonders of creation have been illustrated in the many images that advanced telescopes like Hubble have provided in recent decades (for an example, see the NASA web site images).  It is hard to deny that the creation itself shows the glory of God and is a proof of his power (Psalm 19:1; Romans 1:19-20).

An observable universe that is estimated to be more than 93 billion light years in diameter and containing hundreds of billions of galaxies each having hundreds of billions of stars certainly indicates that God is far beyond our ability to fully comprehend (note: one light year is the distance light travels in one year or almost 6 trillion miles).  The Lord said that he is the Alpha and the Omega—the Beginning and the End (Rev. 22:13); therefore, God existed billions of years ago and he will continue to exist billions of years from now.  Only such an incredible God could plan the future of mankind and predict events long before they were to occur!  For those that love him, his Word reveals his plan for the last days and the promise of eternal life in the ages to come.

Even from this broad overview of Biblical history, it is relatively easy to see how the events of the end fit into the plan of God and where mankind is headed in the future beyond the Second Coming.  It is also clear that the primary pivot points of Biblical history revolve around relatively few events and that most of them would not even be noted by secular historians.  Nevertheless they are crucial for a complete understanding of prophecy and of the end times.  Therefore, all of history including prophetic events that are still in our future can be broken down into the following defining moments…[more]

The final aspect of the prophecies that relate to the effects of nuclear war is the widespread pollution of land and water by radioactive fallout, dust from the explosions and … END_OF_DOCUMENT_TOKEN_TO_BE_REPLACED

In the previous sections, we have seen that everything the Bible describes as being a characteristic of the Great Tribulation also correlates precisely to what is now expected … END_OF_DOCUMENT_TOKEN_TO_BE_REPLACED

Scorpions of Death As we have seen in previous sections, one of the main consequences of a nuclear explosion happening at or near ground level is that millions of tons of … END_OF_DOCUMENT_TOKEN_TO_BE_REPLACED

The Trumpet Judgments In the book of Revelation, the Apostle John records terrible visions of nuclear weapons causing vast destruction at the end of the age through the … END_OF_DOCUMENT_TOKEN_TO_BE_REPLACED

Although the formation of a mushroom cloud has become the most recognizable feature of a nuclear explosion (see previous section), it is actually not the generation of smoke … END_OF_DOCUMENT_TOKEN_TO_BE_REPLACED

The effects of nuclear weapons have been studied extensively since the initial use of atomic bombs upon Japan in 1945. As the pillars of smoke rose above the decimated cities … END_OF_DOCUMENT_TOKEN_TO_BE_REPLACED

Fire, Smoke, and Brimstone The Battle of Armageddon is predicted to be the last and greatest conflict of mankind. Even the non-believing world has adopted this Biblical term … END_OF_DOCUMENT_TOKEN_TO_BE_REPLACED