You are here: Home / Mark of the Beast / RFID Now Used to Monitor People 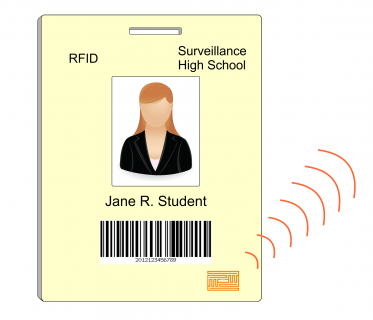 Radio frequency identification (RFID) has been used for years to identify and track the movement of goods and animals.  Although the technology was invented in the 1970s, it wasn’t until the late ’80s and ’90s when it began to be used extensively.  RFID chips contain a radio frequency transponder and an antenna that can respond to a digital radio signal from a scanner and transmit back a unique digital number.  In 1999, several standards organizations set up the Auto-ID Center at MIT and explored the use of RFID tags for product tracking.  As a result of these efforts, today nearly every shipping container has an identifying RFID chip and bar code that can be used to track the transfer of products from manufacturers to wholesalers or retailers.  Each of these unique RFID tags contains a digital number, which marks the product for identification.  This has helped to maintain inventory and accurately account for products being bought and sold in many corporations around the world.

However, it is not just manufactured goods that are being tagged with these chips.  Most local governments now mandate that pets be implanted with an RF transponder for identification and to certify that they’ve received the required shots.  In addition, the USDA demands that certain farm animals such as cattle be tagged with an RFID transponder to monitor them from birth to slaughter, thus assuring traceability in the food supply.

And now, in a prelude to the total surveillance society coming upon us, RFID technology has begun to be used to track humans.  Since 2004, there have been a number of attempts to implement RFID tracking in schools in order to monitor children while they are on campus.  Some schools have attempted to require that students carry RFID badges with them at all times.  Other schools have embedded the RFID tags within student’s backpacks or clothing.  The latest ID badges are not the old ID cards with just a name and picture on them, but they also have an RF transponder embedded in them that permits the constant monitoring and localization of each child on school property in real time.

Unlike some RFID cards that companies have used to keep track of employees entering buildings or for tracking the number of hours worked, these new transponders have dramatically increased range to communicate with scanners located throughout a facility.  John Jay High School in San Antonio implemented the use of long range RFID badges in addition to over 200 surveillance cameras to constantly monitor their students and faculty.  Although one student in this Texas high school has refused to wear the badges, saying that they are too close to the Mark of the Beast, and has taken the district to court over the requirement to wear them, it is likely that their use in schools, companies, and governments is now set to greatly expand.  Similar RFID chips and scanners could be used to track people everywhere they go, providing a high tech surveillance mechanism the likes of which we have never known.

During the last few years, RFID manufacturers have been working with companies to add personnel tracking capabilities to their employee badges.  It is reported that one U.S. retail company with over 40,000 employees in over 3,000 locations has begun implementing this surveillance system to keep track of all their personnel in real time.  Using a new battery-assisted passive (BAP) RFID tagging technology, these badges can be read by scanners up to 80 feet away, thus assuring that accurate people tracking can be accomplished even in the largest of facilities.  Seeing that companies and schools are implementing these devices, how far away can we be from a law requiring a national ID card that contains a powerful RF transponder to track citizens everywhere they go?

The Bible predicts that there will arise at the end of the age a worldwide empire that will use implanted marks to identify people and facilitate a cashless society where all buying and selling is completely controlled by the government (see Rev. 13:1-18).  The advent of RFID technology makes possible the electronic communication between an implanted chip and an RF scanner, which makes a true cashless network possible for the first time.  This electronic system is being developed in the same generation as many other prophecies of the end are being fulfilled.  These “spy chips” as they have been called, are about to get far more prevalent as the world marches closer to the end of the age and the return of Christ.

The final aspect of the prophecies that relate to the effects of nuclear war is the widespread pollution of land and water by radioactive fallout, dust from the explosions and … END_OF_DOCUMENT_TOKEN_TO_BE_REPLACED

In the previous sections, we have seen that everything the Bible describes as being a characteristic of the Great Tribulation also correlates precisely to what is now expected … END_OF_DOCUMENT_TOKEN_TO_BE_REPLACED

Scorpions of Death As we have seen in previous sections, one of the main consequences of a nuclear explosion happening at or near ground level is that millions of tons of … END_OF_DOCUMENT_TOKEN_TO_BE_REPLACED

The Trumpet Judgments In the book of Revelation, the Apostle John records terrible visions of nuclear weapons causing vast destruction at the end of the age through the … END_OF_DOCUMENT_TOKEN_TO_BE_REPLACED

Although the formation of a mushroom cloud has become the most recognizable feature of a nuclear explosion (see previous section), it is actually not the generation of smoke … END_OF_DOCUMENT_TOKEN_TO_BE_REPLACED

The effects of nuclear weapons have been studied extensively since the initial use of atomic bombs upon Japan in 1945. As the pillars of smoke rose above the decimated cities … END_OF_DOCUMENT_TOKEN_TO_BE_REPLACED

Fire, Smoke, and Brimstone The Battle of Armageddon is predicted to be the last and greatest conflict of mankind. Even the non-believing world has adopted this Biblical term … END_OF_DOCUMENT_TOKEN_TO_BE_REPLACED

For it is written, As I live, saith the Lord, every knee shall bow to me, and every tongue shall confess to God.
Romans 14:11
DailyVerses.net