You are here: Home / Israel / New Israeli Settlements Around Jerusalem 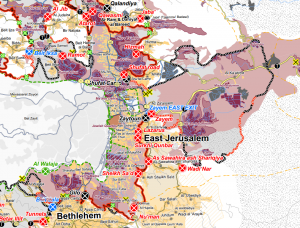 The government of Israel recently announced that it was approving the construction of thousands of new homes in an area around East Jerusalem.  Israel is continuing their expansion of Jerusalem in the heavily contested region of the West Bank, which the Palestinians claim as their own territory and capital.  The United Nations and most countries condemned this building program as not being helpful for finding a peaceful solution to the Palestinian problem.  However, the Bible says that this problem will focus upon Israel, and particularly Jerusalem, increasing tension until the final battles break out at the end.  Joel predicts that when the Jews return to their land in the last days they will scatter the people who scattered them and displace those who wrongly possessed their land (Joel 3:1-7).  Zechariah predicts that all nations will attack Jerusalem just before Christ returns (Zechariah 14:1-2).  We have seen these prophecies begin to take place in our generation, as the returning people of Israel scattered the existing inhabitants of the land and even now continue to repossess ever more Palestinian land.  Contrary to what the world believes, it is not the Jews who are occupiers of the land, but the Palestinians who are living on land that is not theirs.  This conflict will result in ever increasing tensions until all nations of the world are gathered to Israel in battle and judgment (Joel 3:9-16).

The final aspect of the prophecies that relate to the effects of nuclear war is the widespread pollution of land and water by radioactive fallout, dust from the explosions and … END_OF_DOCUMENT_TOKEN_TO_BE_REPLACED

In the previous sections, we have seen that everything the Bible describes as being a characteristic of the Great Tribulation also correlates precisely to what is now expected … END_OF_DOCUMENT_TOKEN_TO_BE_REPLACED

Scorpions of Death As we have seen in previous sections, one of the main consequences of a nuclear explosion happening at or near ground level is that millions of tons of … END_OF_DOCUMENT_TOKEN_TO_BE_REPLACED

The Trumpet Judgments In the book of Revelation, the Apostle John records terrible visions of nuclear weapons causing vast destruction at the end of the age through the … END_OF_DOCUMENT_TOKEN_TO_BE_REPLACED

Although the formation of a mushroom cloud has become the most recognizable feature of a nuclear explosion (see previous section), it is actually not the generation of smoke … END_OF_DOCUMENT_TOKEN_TO_BE_REPLACED

The effects of nuclear weapons have been studied extensively since the initial use of atomic bombs upon Japan in 1945. As the pillars of smoke rose above the decimated cities … END_OF_DOCUMENT_TOKEN_TO_BE_REPLACED

Fire, Smoke, and Brimstone The Battle of Armageddon is predicted to be the last and greatest conflict of mankind. Even the non-believing world has adopted this Biblical term … END_OF_DOCUMENT_TOKEN_TO_BE_REPLACED

Therefore thou shalt keep the commandments of the Lord thy God, to walk in his ways, and to fear him.
Deuteronomy 8:6
DailyVerses.net