You are here: Home / Mark of the Beast / EMV Global Electronic Payment Systems 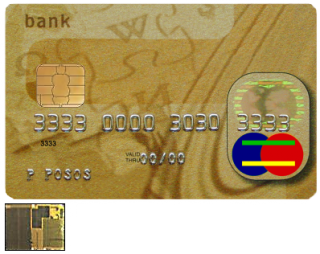 The three major credit and debit card companies, Europay, MasterCard, and Visa, have created a standard for universal smart card communications and payments that will make a cashless society possible.  Called EMV (from the companies’ initials), the standard enables more secure electronic payments that use contact-based or contactless interactions with point-of-sale (POS) terminals worldwide.  The embedded chip generates a unique identifying number whenever the card is used.  This transaction code can be combined to an individual personal identification number (PIN) to better eliminate fraud, since unauthorized use of just the account number would not result in generating the special code.  The EMV chip-based smart cards have been distributed extensively in many parts of the world, including over 850 million cards in the EMEA region (Europe, the Middle East, and Africa), 396 million cards in the Asia-Pacific (APAC) region, and over 345 million in Latin America.  Only North America lags behind in this process, where smart card technology still is relatively scarce.  In fact, an American traveling to Europe may find that their standard credit or debit cards won’t work in certain POS terminals using the latest technology.  However, this situation is about to change in a big way.

In 2012, American Express announced plans to switch over to a next-generation smart card in the U.S., which fully utilizes the EMV technology.  MasterCard and Visa are following quickly to implement smart cards in the U.S., too.  It is estimated that 8.6 billion smart cards will be shipped in 2013 across all applications, including secure entry, government ID, transportation, and as payment cards.  At least 16% of these cards (1.38 billion) will be capable of both contactless or contact-based POS with EMV compatibility (ABI Research and Gemalto NV).  This same technology also is being incorporated into smart phones to allow their use in contactless payments through near-field communications (NFC) technology, which permits the phone to interact with the sales terminal simply by bringing the phone near the POS reader.

EMV payments made by smart cards or smart phones are revolutionizing the process of buying and selling.  In some regions where this technology already is heavily implemented, cash payments are being phased out entirely.  Soon, instead of using any form of physical money, only electronic bits of value will be exchanged for goods and services.  The EMV system is being touted as increasing the security of payments over those made using normal credit or debit cards by validating a person’s identity, account number, and generating a transaction code.  They also can employ further validation through biometric characteristics combined with a PIN.

The system and Mark of the Beast predicted in the Bible to arise in the last days (Revelation 13:16-18) will use a number, a name (identification), and a mark embedded in the right hand or forehead (likely an EMV-capable microchip).  The prophecy says that no one will be able to buy or sell unless they have this mark.  Incredibly, the system that will make it all possible is being created now in preparation for the rise of the Antichrist and the full implementation of the Mark.  As this technology comes together, it is becoming more apparent that we are getting very close to the end of the age and the return of Christ!

The final aspect of the prophecies that relate to the effects of nuclear war is the widespread pollution of land and water by radioactive fallout, dust from the explosions and … END_OF_DOCUMENT_TOKEN_TO_BE_REPLACED

In the previous sections, we have seen that everything the Bible describes as being a characteristic of the Great Tribulation also correlates precisely to what is now expected … END_OF_DOCUMENT_TOKEN_TO_BE_REPLACED

Scorpions of Death As we have seen in previous sections, one of the main consequences of a nuclear explosion happening at or near ground level is that millions of tons of … END_OF_DOCUMENT_TOKEN_TO_BE_REPLACED

The Trumpet Judgments In the book of Revelation, the Apostle John records terrible visions of nuclear weapons causing vast destruction at the end of the age through the … END_OF_DOCUMENT_TOKEN_TO_BE_REPLACED

Although the formation of a mushroom cloud has become the most recognizable feature of a nuclear explosion (see previous section), it is actually not the generation of smoke … END_OF_DOCUMENT_TOKEN_TO_BE_REPLACED

The effects of nuclear weapons have been studied extensively since the initial use of atomic bombs upon Japan in 1945. As the pillars of smoke rose above the decimated cities … END_OF_DOCUMENT_TOKEN_TO_BE_REPLACED

Fire, Smoke, and Brimstone The Battle of Armageddon is predicted to be the last and greatest conflict of mankind. Even the non-believing world has adopted this Biblical term … END_OF_DOCUMENT_TOKEN_TO_BE_REPLACED